A great group of people and organizations are sponsoring a new podcast on San Diego Urbanism. Me and SDSU Professor Larry Herzog are co-hosting with the intent to bring an academic and practitioner perspective to urban issues.

Enjoy it on iTunes Podcasts here and listened to online here: http://whosecity.libsyn.com/temporary-paradise

This first episode is on Temporary Paradise? A great vision plan for San Diego put forth in 1974 by Donald Appleyard and Kevin Lynch. And, honestly, the 2nd half is much better than the 1st as we learned a lot with this first recording. Thank you for listening and we intend to produce one episode a month

From May 11 – 19th, I had the opportunity to speak at the 26th annual Congress for the New Urbanism (CNU) in Savannah, Georgia. My 18th CNU (in a row), these are always valuable to me on a professional and personal level. This was a memorable experience spending time walking around Savannah’s squares and waterfront as well as touring mid-America before arriving on the eastern seaboard. The most memorable part of the week was actually a blur. My trip began with a frantic four-day bus tour from Memphis to Savannah. We visited and compared the ‘new towns’ Harbortown (MS), Providence (AL), Gorhams Bluff (AL), Serenbe (GA), Glenwood Park (GA), Nexton (SC), I’on (SC), and Habersham(SC), with the downtowns and Innovation Districts of Memphis, Chattanooga, Huntsville, Atlanta, Greenville, Charleston, Savannah.

The most instructional places were in cities that imported the ‘new town’ housing types into its existing/older neighborhood pattern, which made for some real hits and misses. One of the biggest hits was the Southside neighborhood in Chattanooga.  An old grid of vacant buildings and a tight network of street with mature street trees had been revitalizing over the past 5-years using traditional ‘new town’ housing’s front porch, stoops, and forecourts, which fit comfortably. Vacant manufacturing buildings were expertly adapted into mixed-use and live-work units all sparked with the building of new school, Battle Academy.  The neighborhood is anchored by the now revitalized Chattanooga Choo-Choo historic rail station with a market hall that has great restaurants, bars, shops, and hotel.

The second half the week spent at the Congress speaking on how-to design for a specific community character in neighborhoods and small towns, and my vertical ‘transect’ idea for big city downtowns.  Thanks to Kevin Klinkenberg and Eric Brown‘s hard work on the local host committee, more than 1,600 advocates for urbanism gathered to hear Jan Gehl, Andres Duany, and Peter Calthorpe speak on their latest work and perspectives. Based out of Washington, DC, CNU is an international nonprofit organization with over 3,000 members from major urban centers to historic small towns. And through 27 years of advocacy, CNU has changed the national conversation from a debate over sprawl to a discussion on how to reinvest in our cities and towns as Americans both young and old are demanding walkable lifestyles, the market for unique and green places is growing in every region.

Savannah is always an illuminating experience for a west coast urban designer. The city was originally designed to be a utopian community with its ubiquitous squares the by-product of lofty thinking. Places like this inspire me to aspire towards designing towards utopia for my local projects… if just to get one really nice park or plaza.

As for the tour, in greater detail, I have to express my heartfelt gratitude to Nathan Norris, Laura Clemens, and Kate Duro (City Building Exchange Express) for hosting a memorable road trip. Jack Kerouac would of been burned out by this adventure. Plus, having the people we had to explain and tour us through each place was invaluable. Absolutely worth every dime as the tremendous effort to coordinate was obvious in the results, which is that I am still learning from it this week.

Below is my roman a’ clef notes version of the tour is as follows:

On our first night, Elvis and I walked through downtown Memphis with our feet 10-feet off of Beale under WC Handy’s watchful, all-knowing gaze. We knew that he knew that we knew. So, we went on tour the next morning.

Memphis, TN – HarborTown – Expertly assembled as a rough diamond found in the middle of the Mississippi. A great way to start a tour that would alternated between many older ‘new’ towns and several downtown infill projects. It set the tone perfectly as a stable, understandable, competently delivered new town in a place that was genuinely new. Drove away fearing what Jesus said about building on sand.

Memphis, TN – Uptown Infill – Tried to take a picture of Elvis’ high school but my thumb got in the way. Seeing Harbortown housing placed in a mindless grid showed how mindless the grid can be.

Memphis, TN – CrossTown/Midtown – Had never seen such a thing. Cutting the atriums was brilliant and I still cannot fully conceptualize what a Vertical T6 Village in the midst of historic T4/T3 General sub-urban housing means… Amazing adaptive reuse and couldn’t conceive of seeing another on in my life (only to march across Atlanta later on the tour and be completely dumbfounded again).

Memphis, TN – The Edge / Medical District – All I could think of was how to bottle up and sell Tommy Pacello’s can-do spirit. Inspiring, and a dynamo that any city would be fortunate to have. Speaking of big personalities, Elvis appreciated being back in Sun Studios again after a long layoff.

Huntsville, AL – Downtown Huntsville – Its downtown director, Carl Perkins, is having fun, you can really see it. However, that spring at the foot of the downtown hillside thoroughly impressed this SoCal desert tortoise most. Again, never seen anything like that before.

Huntsville, AL – Village of Providence – Expertly executed. A lot of housing taming a former arterial. Solid. And, I appreciated Laura’s passionate perspective on its harm to downtown, but see these old New Towns as successful Trojan Horses as what happened out in the woods wouldn’t of been allowed to happen in broad daylight at that time. We were decidedly a Suburban Nation with everyone defining themselves by their own Pink Cadillac. 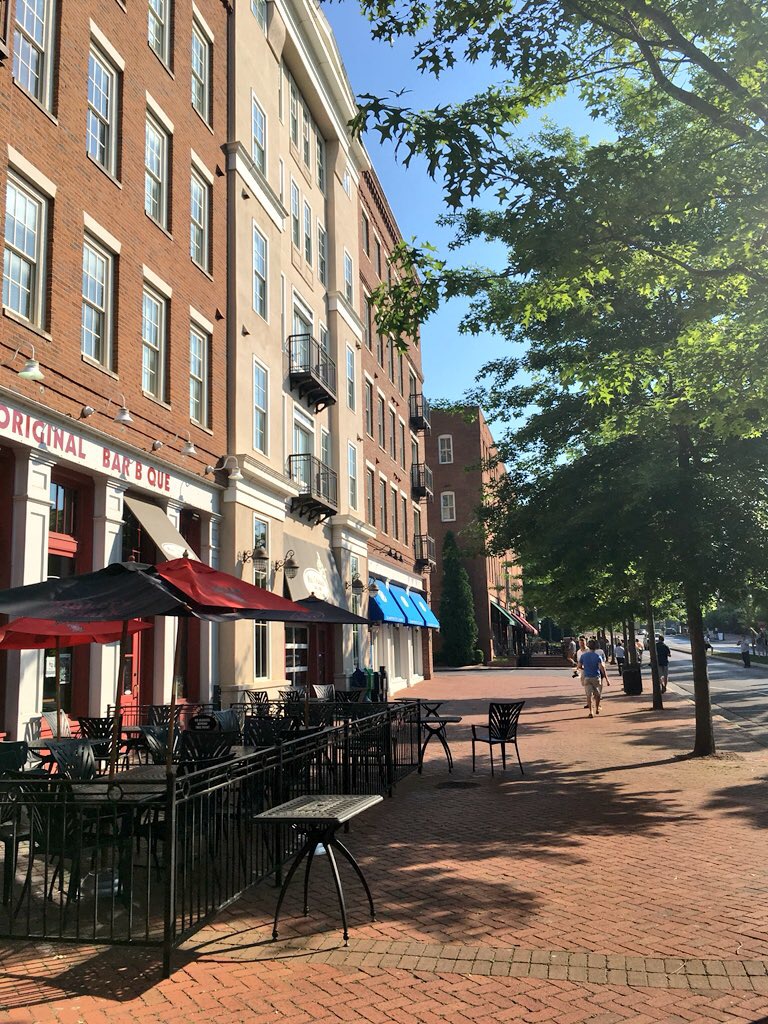 The Village of Providence, AL

Chattanooga, TN –  Southside – Again, TND quality housing + missing middle townhouses and live work quarters, set in a mindless grid. But, with the compactness lacking in Uptown Memphis it felt more livable. Appreciated listening to Bob McNutt, Director of Real Estate, describe this place and the Chattanooga Neighborhood Enterprise nonprofit housing organization dedicated to Building a Better Chattanooga.
Chattahoochee Hills, GA – Serenbe – The Smartest Sprawl I’ve ever seen… Stunning details, smartly promoting compact growth in one spot in the city, but have no idea what this will be in 100 years.

Atlanta, GA – Glenwood Park – Expert infill. Also stunning details but accessible to anyone wanting to live in a great neighborhood is a big city.
Atlanta, GA – Krog City Market*/Inman Park/Beltline***/Ponce City Market – The Sears monolith as a retail/parking catalyst was amazing too. Great deal to learn from in this urban context. The rails-to-trails parkway works amazing well to provide amenity to high density. The parks, market halls, different housing types, adaptive reuse, it was all so beautiful… until I started to sweat. Back on the bus, quick! 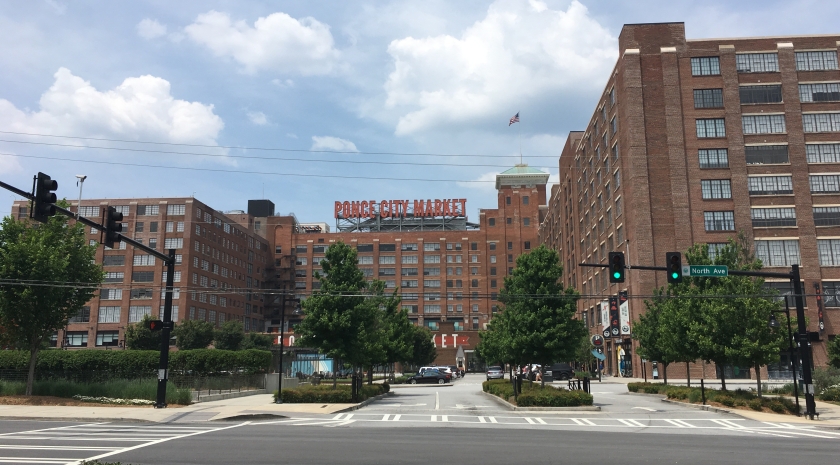 Greenville, SC – Downtown Greenville – Surprise as a form of delight… A nice Main Street, with Americana confederate forces giving off bad vibes on one end and a river park on the other end mindful of the Beltline… Amazing! Again, great density with great amenity. The last leg of Main Street over the riverpark was more worth the drive through Columbia, SC.

Summerville, SC – Nexton – I completely agree with Rick Hall that the production builders are getting it! I liked it. Yes, parks and streets were oversized, but that’s the… Next Urbanism.
Mt Pleasant, SC – I’On – Honestly, looking forward to what Jason King of Dover Kohl has planned for its remodeled downtown plaza (no curbs, no lawn). The canals/quarry lakes were marvelous.
Charleston SC – Downtown Charleston – The real deal banana peel historical American city. Touring that very old family house with Cary Grant’s friend was a real highlight. Drinking a scotch, sitting in a smoking room, looking at firearms from every major American conflict while staring at oil paintings of beautiful family matriarchs with Elvis was a sublime American moment. Would love to have spent several days there. Then, Elvis left the building (bus). And I was wore out at this point.

Beaufort, SC – Habersham – The attached buildings were immaculate. The town center kept my attention and I appreciated spending time sitting with iced drinks at this point too.

Afterward: The place that has continued to resonate with me is Memphis. I feel like our American soul lives in there. I wanted to see the MLK Jr. Civil Rights Museum, Graceland, and Tupelo. The old, new, historic, future, and that wild Crosstown Commons still swirl in my mind. Savannah too. Beyond that, comparing infill with new towns directly, back-to-back was marvelous and illuminating (Ok, don’t tell, but Elvis was Trent Claughton, Carl Perkins was Chad Emerson, and I am the SoCal desert tortoise).