I’ve been fortunate to have been invited twice to speak about my ideas on urbanism at San Diego’s TEDx American’s Finest City events.

The first one was held in 2012 at Scripps Oceanic Institute (Walter Munk is a true American hero) and was on my thoughts on how to code/build towards a local community character in post-redevelopment California. The idea originated from a week Leon Krier spent in San Diego and his approach to creating a ‘there, there.”

The second one was held in 2013 at the NewSchool of Architecture + Design. This talk was on my ideas of San Diego’s next urbanism, after the suburban exodus back to downtown. As always, inspired by Leon Krier, I see our culture becoming more secure with urban living. Plus, our cities are built upon trends and urbanism is simply the latest.

Other videos of my thoughts are below for your viewing pleasure:

In an era of austerity when our bridges are falling, levees failing, and streets crumbling, cities are coming to the harsh realization of the difficulty and economic importance of simply maintaining our existing infrastructure. The conflicts we are experiencing today are due to states and cities not being able to afford razing and completely building new bridges, storm drains and thoroughfares to replace failing infrastructure, and yet our regulatory and construction standards have not adjusted to this new reality. We are painfully relearning the value of “efficiently built infrastructure” and its effects on our quality-of-life, as well as its effects on our prosperity or failure of older places.

In order to increase the efficiency, speed and perceived freedom of the automobile, we narrowly focused too much of our money and resources on building cultural wastelands. Our most recent generation is rejecting their parent’s suburban lifestyle and the well-known social and health issues these placeless-places churn out. The 21st century is witness to the theoretical end to the historically devastating Urban Renewal policies and programs formulated during the mid-century modernist era. Following the national public backlash over the 2005 Supreme Court decision to support eminent domain over the Kelo vs. New London (Connecticut) case, the State of California rescinded its long-time Redevelopment Agencies. Most agencies across the nation have limited their redevelopment authority to non-residential districts, thereby being careful to not repeat California’s course.

The national discourse on urbanism has thankfully evolved from slum clearance for economic development towards building longer-term value through cultivating a community’s distinctive character. This recognition and ongoing respect for a community’s enduring characteristics are, as Ken Greenberg wrote in the Charter for the New Urbanism, “legitimate shapers and influencers of what is to come next.” After 30 years of New Urbanists making the argument for nurturing and cultivating our historical building fabric, this more pragmatic role of stewardship is now being directed towards our city’s infrastructure. This shift from relying on singular “level of service” measurements towards a more localized expectation for holistic “place making” is deeply resonating with Americans. 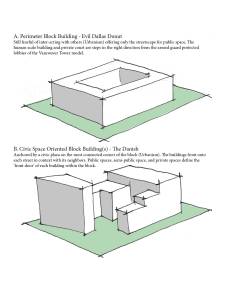 The Next Generation (NextGen) of urban advocates are breaking the cyclical pattern of tabula rasa. Rather than repeating the cry to raze vacant suburban office parks, strip malls and super centers in order to build anew, the NextGen’s Tactical Urbanist are experimenting with tools to re-inhabit and re-purpose placeless-places. The Sprawl Repair Manual, Retrofitting Suburbia, and Sustainable Urbanism are nationally published guides to effectively apply short-term, human-scaled, actions to making long-term improvements to our quality-of-life one block, one street, one building, and one neighborhood at a time.