Every city and town are formed by its neighborhoods, districts, corridors, and its downtown. Each of these place types range from a more urban extreme, such as downtown, towards its more suburban, rural, or natural boundaries. And, each of these include a broad spectrum of public and private functions and places.

Looking in more detail, each neighborhood has its own set of more urban centers, general areas, suburban, and rural edges. For example, in my San Diego neighborhood, our center is the 100% shopping corner with coffee shops, boutiques, bars, mixed-use buildings and bus stops. And, my neighborhood boundary is formed by canyons and Balboa Park. In between are a variety of housing types ranging from garden apartments, bungalow courts, and small lot homes nearer the center to large lot homes along the canyon edges.

Single-use districts are places of industry, education, and regional institutions. These include airports, hospitals, and military bases. I tend to put suburban sprawl in these single-use districts with their ubiquitous pods of housing and strip centers, and nary shall the twain meet.

A city’s corridors are either natural, such as rivers, beaches and protected habitats, or urbanized, such as railways and thoroughfares. Thoroughfares may link one side of the city to the other, or one side of a neighborhood to another, and often change character as they transition from downtown, through older streetcar neighborhoods, and finally to a city’s suburban edge.

These thoroughfare corridors are made up of two main elements: centers at key intersections and those segments in between. Thoroughfares may range from well-connected primary streets to less-connected secondary streets. Their centers may range from more intense vertical mixed-use, on at primary cross streets, to less intense horizontal mixed-use at secondary street intersections. A corridor’s intensities and patterns depend upon if they have service alleys and lanes or not, and/or if they have rigid gridiron pattern, a curvilinear network, or are auto collecting arterials in a dendritic hierarchy of streets from freeways to cul-de-sacs.

Intersections have differing intensities depending on street type(s) and number of connections.

All of which means that context matters.

Using place type elements begins a context-sensitive approach to place-making allows for both understanding the existing conditions, such as discerning if the site is on a primary avenue in a downtown neighborhood or on a secondary street in a suburban residential district, as well as being able to plan for the most appropriate design intervention if it is located in an older streetcar neighborhood with rear alley access. And with that said, a well-connected street will change its character over many miles.

In short, general thoroughfare types range from Highways (connecting regions), to Boulevards (connecting cities), to Avenues (connecting neighborhoods), to Streets (connecting blocks), and then to Alleys (connecting lots).  Each of these support a variety of transit, bicycle, pedestrian, car facilities. By understanding a corridor via its place and street type proponents can use this context-sensitive approach to retrofitting our auto-dominated streetscapes, as well as to explaining changes to local stakeholders and decision-makers (I hope…). 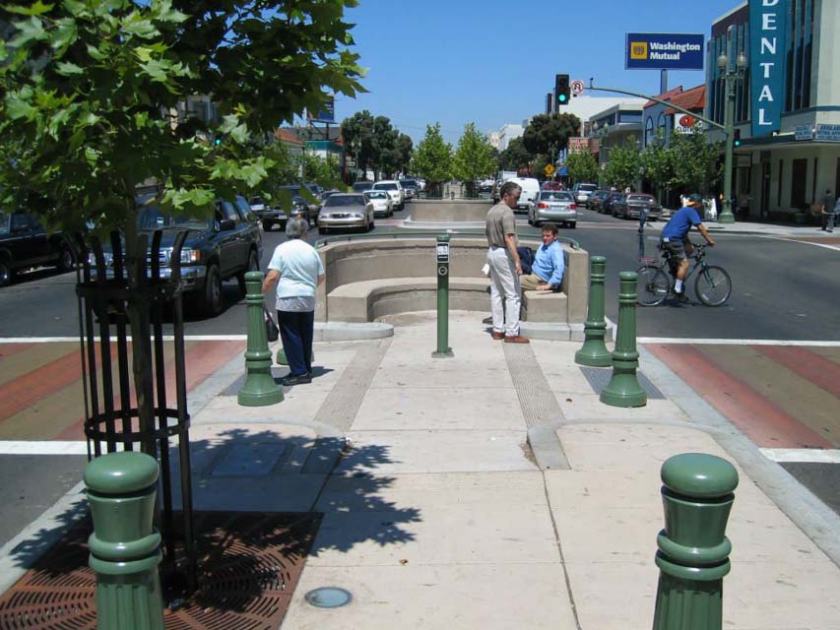 Seattle Retrofitting and Transforming its Streetscapes.

The Salk Institute is an other-worldly place as I had seen it on posters and calendars for many years before I experienced it first hand. At certain times of the day, nearer sunset, the space can take your breath away. The concrete and granite buildings and plaza are much more transcendental than harsh. The travertine pavers have pulpy texture, and the Roman-esc ‘pozzuolanic’ concrete has a glowing softness too. While mid-day is rarely as nice, the site is never hot due its ocean front location (Mitt Romney couldn’t buy a better lot in La Jolla).

Its power comes from the dynamic tension between its very formal/classical plaza + excellent contemporary architecture + the forced perspective on the mesa edge/ocean natural setting = Wow.

I agree with Witold Rybczynski that modernist architecture sits best in nature and this is such a place looking in one direction (but, don’t turn around). Adding the sound of the plaza’s water rubicon/falls, and scent from its formal rows of orange trees, the experience can be sublime… then you get back in your car and drive through suburban office park hell to go home.

If it wasn’t perched on the side of a cliff, I would bet this space would be the only recognizable place to a San Diegan today a 1,000 years from now…

This is inspired by a terrible article critical of ‘placemaking’ written by James Russell (I’m purposely not providing a link as it was simply a hit on Fred Kent’s excellent Project for Public Spaces group) who states that the Salk was an example of a great ‘public space’ generated without public input. Well, it is not. The Salk is a private institution and the space is only open to the public during work hours and patrolled by security guards. This type of semi-private/public space was discussed thoroughly during the ‘Occupy Wall Street’ summer and their squatting protests on public/private Zuccotti Park.

The idea of ‘public space’ is a relatively new with its revolutionary genesis in our country found in Frederick Law Olmsted’s ‘Central Park’ and Yosemite Valley national park plan. Abraham Lincoln appointed Mr. Olmsted to ‘create a place where all men are equal,’ and these very large public spaces are literal metaphor of this very big idea… We are the land of the free.

While the Salk Institute is a powerful place, true public space is decidedly more powerful, transcendental and revolutionary. And from this, I better appreciate why people such as Lincoln, Olmsted, Lou Kahn, Jonas Salk become historical figures as we are standing on the shoulders of giants.

I’ve been fortunate to have been invited twice to speak about my ideas on urbanism at San Diego’s TEDx American’s Finest City events.

The first one was held in 2012 at Scripps Oceanic Institute (Walter Munk is a true American hero) and was on my thoughts on how to code/build towards a local community character in post-redevelopment California. The idea originated from a week Leon Krier spent in San Diego and his approach to creating a ‘there, there.”

The second one was held in 2013 at the NewSchool of Architecture + Design. This talk was on my ideas of San Diego’s next urbanism, after the suburban exodus back to downtown. As always, inspired by Leon Krier, I see our culture becoming more secure with urban living. Plus, our cities are built upon trends and urbanism is simply the latest.

Other videos of my thoughts are below for your viewing pleasure: